Next up on our Women of the Bible series..

Queen Esther.  Ever wonder how this young girl gained the courage to approach the king when it most likely would have gotten her killed?

Her entire race was in jeopardy.  Haman planned to have them all killed with permission of the king.  All because one man wouldn’t bow down to him and give him the honor he felt he deserved.  Oh how pride and greed will lead to our demise… 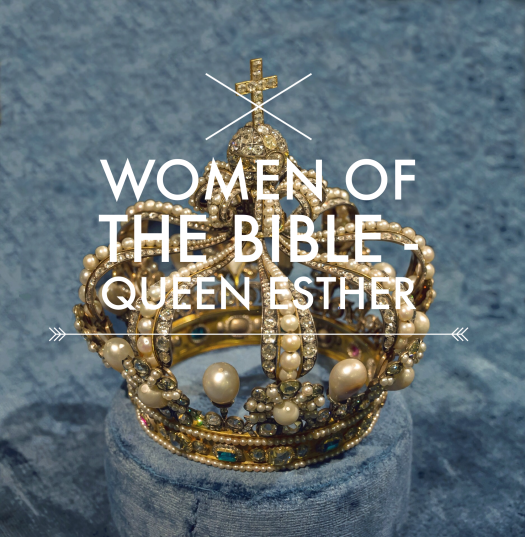 The king wasn’t please with his current wife Vashti. He had asked her to come to him and she refused.  I’m sure at first his pride was hurt.  She was beautiful and he wanted to show her off.

One of the kings noble men spoke up and pointed out to the king that Vashti’s defiance would spread throughout the land and all the women would begin to disobey their men.  This could not be tolerated in that day.

So he removed her from the position of queen and sent out a decree for all the young virgins to come to the palace.   They would be pampered, and be beautified for some time.   Then one by one they would be brought before the king so he can choose one that does please him.

Esther caught his attention and she became queen.   She was lovely in figure and beautiful, but she had one secret.  She was a jew.  Not that it really mattered much except, her uncle Mordecai had told her to keep it a secret for the time being.

Mordecai sat a the city gate and one day he over heard 2 of the kings guards conspiring to kill the king.  Mordecai gave this information to Esther.  She reported to the king and the information was found to be true. The king was saved and the 2 men were executed.

One man, Haman was honored by the king and given place at his right hand.  Mordecai found Haman to be prideful and refused to bow to him when he passed.  This made Haman very angry.  He went to the king and lied to him, saying there was an entire race of people who refused to honor the king and it would be in the kings best interest to put them all to death.  The king agreed and had Haman send out the order.

Esther 3:5
When Haman saw that Mordecai would not kneel down or pay him honor, he was enraged. 6 Yet having learned who Mordecai’s people were, he scorned the idea of killing only Mordecai. Instead Haman looked for a way to destroy all Mordecai’s people, the Jews, throughout the whole kingdom of Xerxes.

When Mordecai heard of this, he went straight to Queen Esther and told her she must approach the king and stop this from happening.  Unfortunately for Queen Esther, the king hadn’t sent for her in awhile and approaching him without being called for was dangerous.

Esther 4:11
“All the king’s officials and the people of the royal provinces know that for any man or woman who approaches the king in the inner court without being summoned the king has but one law: that they be put to death unless the king extends the gold scepter to them and spares their lives. But thirty days have passed since I was called to go to the king.”

Mordecai reminded the queen that even though she was in the house of the king, she was infact a Jew and would be wiped out along with the rest of them.  So she went.

I find what happens next interesting.  She didn’t tattle on Haman right away.  She invited both Haman and the king to a banquet, twice.  They sat and ate together.  Why?  No one really knows.  The word doesn’t tell us.

One can only speculate.  I think maybe she needed just the right moment to tell the king that his most trusted official was going to have her killed.  Maybe she was testing the waters to see who the king revered more, Haman or herself.  Maybe she needed time to pray.  It’s hard to say, but the king asked her 3 times before she told the king the truth.

Esther 7:3-6
Then Queen Esther answered, “If I have found favor with you, Your Majesty, and if it pleases you, grant me my life—this is my petition. And spare my people—this is my request. 4 For I and my people have been sold to be destroyed, killed and annihilated. If we had merely been sold as male and female slaves, I would have kept quiet, because no such distress would justify disturbing the king.”

5 King Xerxes asked Queen Esther, “Who is he? Where is he—the man who has dared to do such a thing?”

6 Esther said, “An adversary and enemy! This vile Haman!”

The End of Haman

Can you imagine being Haman at that moment?  The word says Haman was terrified before the king and queen. Rightly so.   The king got up and stormed out.  While he was gone, Haman pleaded with Queen Esther for his life.  Just as the king walked back in, Haman fell on the couch Queen Esther was reclining on.  Oh the anger that burned in the king at that moment.

The king had Haman impaled on a pole Haman had put up for Mordecai just hours before.   See? Greed and Pride got the best of Haman.

Esther saved her entire race of people from complete annihilation.  Her faith that God knew what was about to happen to His chosen people most likely gave her the courage to speak up.  She knew He wouldn’t allow it.  That didn’t change her fear, it just gave her courage and hope.

Deuteronomy 14:2
For you are a holy people to the LORD your God, and the LORD has chosen you to be a people for His own possession out of all the peoples who are on the face of the earth.

What can we learn from this story?  From Queen Esther?  In this world where right and wrong are so often clouded, this story is a good reminder that we should do what is right even when it could very well cost us our lives.

Most of us do not deal with life threatening issues like this every day.  What about those issues that could cost us our relationships, our marriages, or jobs.  What then?

I think the other good lesson here is to turn from greed and pride.  The word says, “Pride goes before destruction, a haughty spirit before a fall.”  Proverbs 16:18.
We see how quickly things turned from good to bad for Haman because of his pride.

What situations have you encountered lately where you needed to to the right thing even if it cost you something important to you?  What did you choose?  Tell me about it in the “Leave Reply” box at the bottom of this page.